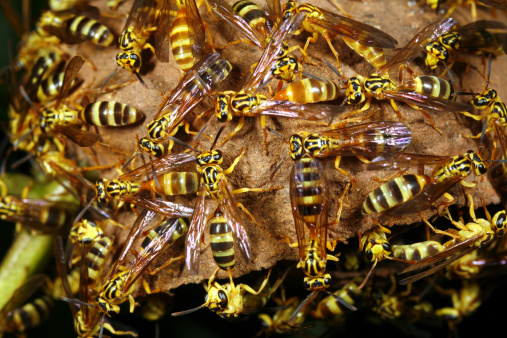 About Bees, Hornets, and Wasps

Bumblebees are velvety, large bodied black and yellow insects that measure 3/4 to 1 1/2” (19.1-38 mm) long. They play an important role in pollination, visiting many garden crops such as tomatoes and squash. There are nearly 50 species of bumblebee native to North America. They form colonies led by a queen.

Bumblebees will sting readily in defense of the hive, but are not considered aggressive while feeding unless directly threatened. These bees can sting multiple times, and do not leave behind a stinger or venom sac. Nests are constructed in abandoned rodent or bird nests, large piles of loose mulch, or any similar sheltered area with enough insulating material.

Avoid human-bee conflicts by keeping brush and mulch piles away from dwellings, and keep window and eave seams caulked. Bumble bee colonies are abandoned at the end of the season. The worker bees die, and the fertilized queen leaves in search of a new home in which to overwinter. It is a simple matter to wait until there has been a hard freeze to remove an objectionable nest, now empty of bees, and clear away all debris and nesting material. Consult a pest control specialist if removal of an active nest is necessary.

Carpenter bees get their name from their habit of boring into wood to make “galleries” for the rearing of young. They’re worldwide in distribution with seven species occurring in the United States .

Recognition: Adult body length about ½” to 1″, robust form resembling bumblebees but with top surface of abdomen bare and shining. The male has a yellow face; the female’s is black.

Biology: Carpenter bees are not social insects and don’t live in nests or colonies. The adults overwinter, typically in abandoned nest tunnels. In the spring, the survivors emerge and feed on nectar. Then mating begins. The mated female may either reuse an old gallery, bore an entirely new one or extend one from an entrance hole. New galleries average 4″ to 6″ long, but galleries used by several bees may extend up to 10 feet.

Habits: Females nest in a wide range of woods, but prefer weathered and unpainted wood. Male carpenter bees tend to be territorial and often become aggressive when humans approach, sometimes hovering a short distance in front of the face or buzzing at the head. Males have no stinger. The female has a potent sting but it’s rarely used.

Control: Carpenter bee control consists of treating each individual gallery with an appropriately labeled pesticide. Do not seal the treated gallery for 24 to 48 hours so the female has time to be exposed to a lethal dose. Newly matured bees should contact a lethal dose before they can emerge.

Carpenter bees rarely attack painted wood. They can be discouraged from using wood by applying an appropriately labeled repellent material such as one of the pyrethroids.

Paper wasps, hornets and yellowjackets construct nests of a paper-like material made up of a mixture of finely chewed wood fragments and salivary secretions of the wasps. Paper wasps typically build their umbrella-shaped nests under eaves and ledges. These wasps are not as aggressive as yellowjackets or hornets, and can be eliminated rather easily with a wasp and hornet spray sold at most grocery and hardware stores. The added advantage of these formulations is they spray from as far as 20 feet. Treatment of wasps, hornets, and yellowjackets is best performed at night. Paper wasps can be eliminated during the day provided you don’t stand directly below the nest during treatment. Most sprays cause insects to drop on contacted. Standing directly below a nest increases the risk of being stung.

Following treatment, wait a day to ensure that the colony is destroyed, then scrape or knock down the nest. This will prevent secondary problems from carpet beetles, ants and other scavenging insects.

Yellowjackets are another dangerous wasp encountered around homes and buildings. Nests are often located underground in an old rodent burrow, beneath a landscape timber, or in a rock wall or wall of a building. If the nest can be located, it can usually be eliminated by carefully applying a wasp spray insecticide into the nest opening.

Sevin ™, or Ficam ™, dust is very effective provided a handduster-type applicator is used to dispense several puffs of the insecticide dust in to the nest opening (an empty, dry liquid detergent bottle, filled no more than halfway with dust and shaken before dispensing works well).

Treatment should be performed late at night after all yellowjackets are in the nest and less active. It’s best to pinpoint the nest opening during the daytime so you can remember where to direct the treatment after dark. Approach the nest slowly and don’t shine the beam of the flashlight directly into the nest entrance as this may startle the wasps. Instead, shine the beam to the side to illuminate the nest indirectly. Similar to hornets, yellowjackets are extremely aggressive when the nest is disturbed. It may be prudent to call a professional pest control company like ROSS Environmental Solutions, especially when access to the nest is difficult.

If the nest is located away from high traffic areas, another option is to wait and do nothing. Wasp, hornet and yellowjacket colonies die off naturally after the weather turns cold, and the paper casing disintegrates over the winter months.

People Who Are Allergic

Wasp, hornet and yellowjacket stings can be life-threatening to persons who are allergic to the venom. People who develop hives, difficulty breathing or swallowing, wheezing or similar symptoms of allergic reaction should seek medical attention immediately. Itching, pain and localized swelling can be reduced with antihistamines and a cold compress.

Hornets are far more difficult and dangerous to control than paper wasps. The nests resemble a large, inverted tear-drop shaped ball, typically attached to a tree, bush or side of a building. Hornet nests may contain thousands of extremely aggressive when disturbed insects. The nests are often located out of reach and removal is best accomplished by a professional pest control expert. ROSS Environmental Solutions technicians may wear a sealed wasp suit when applying a freeze-type, aerosol insecticide or dust formulation (Sevin, or Ficam) directly into the nest opening.

Hornet nests have a single opening, usually toward the bottom, where they enter and exit. It’s essential that the paper envelope of the nest not be broken during treatment, or the irritated wasps will scatter in all directions

Following treatment, wait at least a day before removing the nest to ensure all the wasps are dead. If hornets continue to be observed, the application may need to be repeated. Experienced pest control operators will sometimes remove a hornet nest attached to a branch by slipping a plastic garbage bag over the intact nest and clipping it at the point of attachment. This technique should not be attempted by anyone else and should only be done at night with a wasp suit.

*Does not include wildlife or WDIR